Know what's in YOUR cup!

What's In Your Green Tea?
By Frances Cerra Whittelsey

Article from http://www.inthesetimes.com/index.shtml
Posted by Love & Tea Company at 12:40 PM No comments:

The place to go to sharpen your skills in cooking fresh local organic whole foods despite life's interruptions  Cookus Interruptus.


Visit the Cookus Interruptus blog now for your chance to win a Love & Tea package.  You only have until March 15th!

It's my great honor to introduce Tara Fisher in this months guest blog post feature.

I have learned in life that everyone needs a place to call their own.  For most of the men that I know this is what they call their ‘Man-cave’.  This usually refers to a basement or garage used for cigar smoking, pool playing, or some other kind of ‘masculine’ form of relaxation.  Some ‘man-caves’ are decorated with movie posters or even photos of beautiful women (only in respectful ways I’m sure) and most are a place where a husband or partner might go to ‘be more himself’ in a fun and relaxing atmosphere.
For some unknown reason the woman of the house seems to have been relegated the kitchen or laundry room as her personal space, and I think this is completely wrong.  While I agree that men and women can each hold separate roles in a household without any disrespect, I do not believe that a woman should have to claim her personal identity based on her role as a mother or wife.

As a stay-at-home mother and wife I am proud of the fact that I provide my husband and sons with home cooked meals and clean clothes on a regular basis.  I also use my time at home to provide educational experiences for my children and research ways for the household to save money.  I take the role of home maker very seriously and do whole heartedly believe that I am providing for my family in a very valuable way….perhaps as valuable as the paycheck that my husband’s employer sends every other week, but I don’t think that there is any sense in trying to measure each of our value as a member of the family.  My husband’s step-grandfather told me on my wedding day that a marriage is not 50/50 but 100/100 and I completely agree with this assessment and pride myself on giving my all as a mother and wife every day.

So for the woman of the house, I propose that instead of a ‘cave’, she claims a perch for herself.  A ‘woman’s perch’ could be any space that she can go to for even just a moment and find herself.  Like a mother bird, a woman needs a place to perch and relax while still being able to assess her surroundings.  I personally spent time envisioning my perch before I claimed it.  There are many factors to take in during this process.  I thought about the layout of my house and the rhythm of my day.  I paid attention to my own comfort level in each room of my house and made sure to find a spot that was not very appealing to the other members of the house.  There are no rules to building your own ‘mother’s perch’, but here are some guidelines that I would suggest:

*Make sure that your perch is easy to access, comfortable to be in, and that it reflects your own personality.

*Decorate your perch with things that make you happy.  My perch has a piece of artwork on the wall close by, made when I was in college, that reminds me of a time when my creativity flowed seemingly never-ending.  I also have my favorite Eagles blanket draped nearby and some of my favorite rocks from my rock collection set out on the dresser.

*Keep your perch completely personal.  If you begin to allow children’s toys or husband’s things to invade your perch it will lose it’s comforting feel and will no longer remind you that you are an individual aside from the label of ‘mother’ and ‘wife’.

*Let your perch evolve.  Allow the space, large or small, to organically evolve and don’t hesitate to change it in time as your own personal likes and dislikes change.

*A perch could be as small as a stool or as large as a full room, the size does not matter.  Try to position your perch in a place that is easy to get to and go there as often as you can.

Once you have found your perch and begun to decorate it and let it evolve, make sure to use it.  Whenever there are a few moments of quiet in the house, go there and flip through that new magazine, sip that cup of tea, perhaps a yoga pose or full body stretch are in order, whatever it is that your body and mind need for that moment, give that to yourself.  Think about the things that make you happy right at that moment.  Since I am a type A person this sometimes means that you might find a notebook filled with lists at my perch.  Sometimes when I find myself feeling heavy I sit in my perch and simply list all of the things that I love about life at that exact moment.  A recent list included cantaloupe, azalea blossoms, and soft fuzzy socks.  This doesn’t have to be complicated; it is merely an exercise used to remind myself of my own individual nature.

Once you have begun using your perch you will find that it becomes your favorite place in this world.  For me this small corner of a room has become my spot on earth.  I have essentially staked claim to this small square footage in the name of my own identity and have been loving the bits of time that I get to spend there ever since.  I greatly encourage every woman to find a ‘woman’s perch’ and use it as much as she can.

About Tara:
Tara is a stay at home mother and wife currently living in Central Florida with her husband and two young sons.  Having spent most of her childhood in the state of NJ she now happily writes and crafts in the tropical climates of Florida with few complaints.  Tara is currently enjoying the sunshine and blessings of life while editing her first novel, cross stitching animal silhouettes, and making her own almond milk, among other creative pursuits.


Thank you Tara for reminding us how important it is to create our own perch! 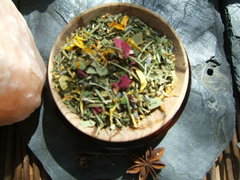 Be Well Steam
A soothing, healing steam for your respiratory & sinus system
Click here to order

About our bath salts:  we formulate all our bath salts with organic essential oils and therapeutic salts to enhance your greater wellness!

We use Pink Sherpa Himalayan Salt in each bath salt, unlike any other salt, unique in both its majestic beauty & in the benefits it provides. When you add Love & Tea's bath salt's to your bath, you will notice the difference immediately.
When mixed with water, these salts create an environment that mimics the most ancient seas on Earth, bringing the magic of the Himalayas right into your own home. When you soak in a salt bath the minerals & nutrients inherent in the salt are delivered to your cells in the form of "ions",  making it easier for your body to absorb & utilize them.

Our line of bath salts include; 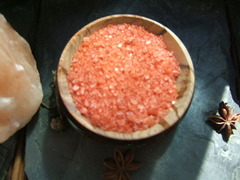 *Sandalwood Powder: Is cooling and calming to the entire body and mind.

Raven Sara: said to strengthen the respiratory system, support adrenal glands and nervous system. Anti-viral and anti-bacterial properties are contained in this oil.

·Frankincense: said to help oxygenate the pineal & pituitary glands. Said to strengthen immune system. May also assist on improving ones attitude and outlook.

Order your Be Well Bath Salt by clicking here 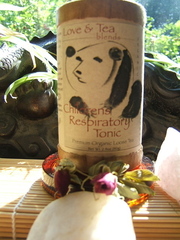